With the forecast calling for a lovely weekend, Ted and I set out on our bikes toward Stub Stewart State Park, along the Banks-Vernonia State Trail.

(Update: Ted posted his own report!)

We started things off proper with some hills. Heading up NW Thurman to Leif Erikson trail through Forest Park to climb our way up to Skyline. 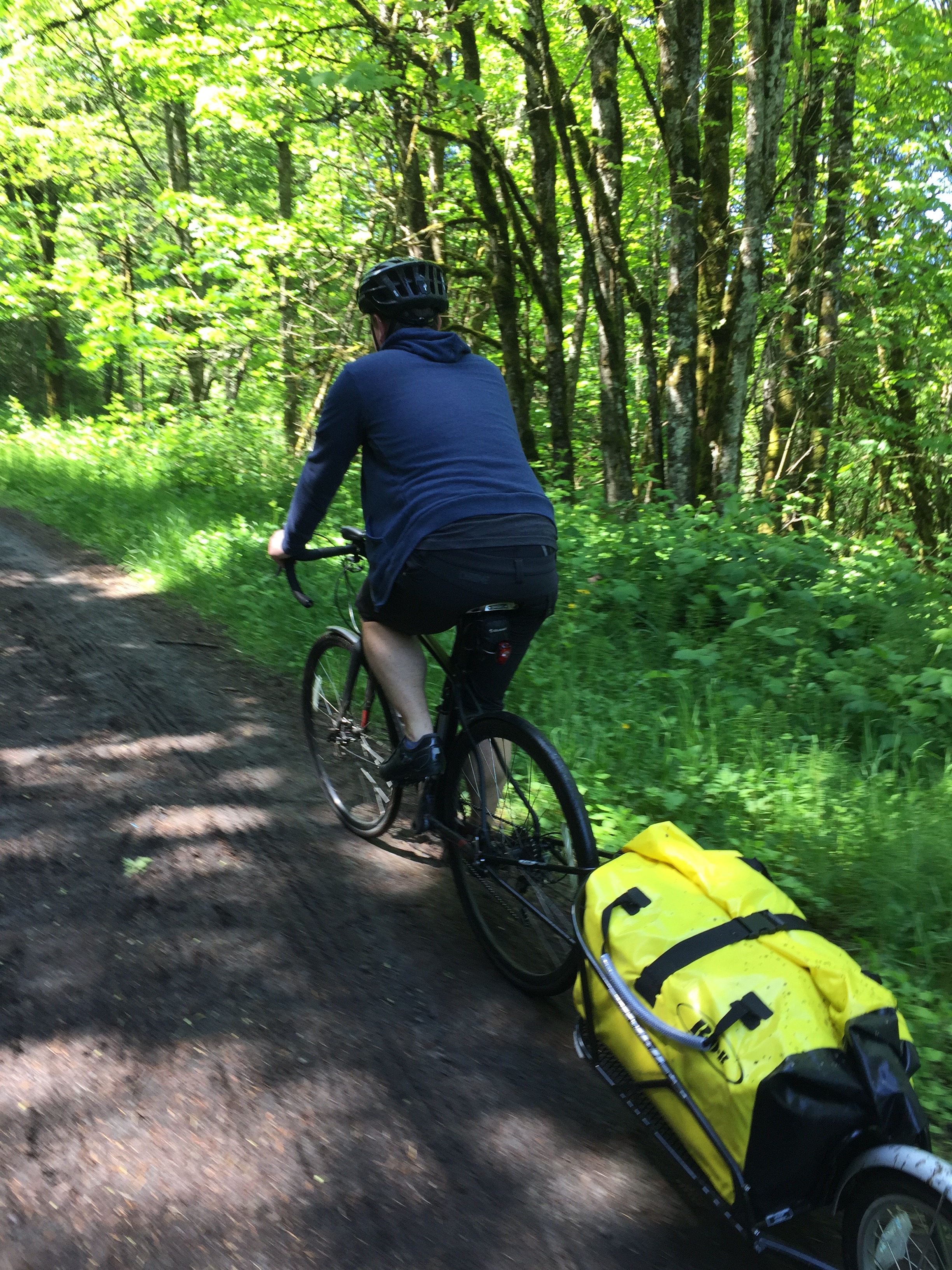 From there we meandered across some back roads over to Helvetia Tavern, apparently well known for their giant burgers. I was oblivious to this fact (despite it being on our waitress’ shirts) and got the fish and chips. Worth it.

We also bumped into a group of 4 cyclists who were also out and about from Portland. One guy on a fixie, one on a hybrid commuter, and the other 2 on some fancy carbon machines. They made pretty great lunch companions!

Fueled and rested, we plowed on. After many miles of fairly pleasant road, a bit more gravel, and a quick restroom stop, we found ourselves at the Banks end of the Banks-Vernonia State Trail.

Now, I’m not going to lie. I thought we were basically done at this point. “Just a few miles up the path here”. And yea, that’s right. Except those few miles were 10, and were uphill the entire way. Normally, this would be fine, I love hills, but when you’re 40 miles and 2000 feet into a ride already, and pulling 40 pounds of trailer, the last thing you want is a mountain finish!

After a good long while, we made it to the park, and got some proof:

There was a little bit of confusion as both Ted and I were operating under the assumption that there was a hiker-biker site that we could just plop down at like so many other campgrounds. There were some “walk-in” sites, which were just sites that didn’t have a dedicated parking space at the site, you had to walk about 50 feet to a shared lot along the road. These were all, unfortunately, reserved.

Ted went off in search of the camp host to see if there was any way we could camp, and they said to check the hike-in sites down by the visitor center. The “hike” in this case was not quite the hike I was expecting, it was a pretty well groomed single lane gravel road leading into a group of campsites.

Sadly, all of the sites there were reserved as well. However, it was starting to get late, and we were definitely well into IDGAF territory, so we picked one of the reserved, but vacant sites and started getting settled. After eating dinner, about 7pm, we decided that the people who had the site reserved were not going to arrive, and set up tents, claiming the site as our own. There will still 2 other sites, so odds were pretty good we could just move to one of the others if our hosts arrived!

After pitching tent and such, I sat down to read for a bit. That lasted about 15 minutes before I decided I was going to bed. It was about 8pm and still very light outside. I was utterly exhausted. I figured I could read in my tent for a bit and be a bit more comfortable than in my camp chair. I think I was out cold by about 8:30.

Woke up Sunday morning, made some coffee, made some eggs, rehydrated one of Ted’s food pouches and broke camp. On the road by 11am.

We continued up the Banks-Vernonia trail until we got to Vernonia, where we met up with some fellow bikers and had lunch.

On the way out of Vernonia, we found that Google Maps was lying to us. The road it wanted us to take was gated off and looked like it hadn’t been traveled in years. So we headed back to the highway and took the long way around.

15 miles and a lot more climbing later, we ended up in the tiny community of Chapman, where we rolled up to a random house where someone was mowing their lawn and asked if we could refill our empty water bottles. He asked us if we were taking the trail, and we had only found it briefly on our way back into town after passing it. I asked where it went east of there and he said it went all the way to Highway 30! He also seemed amazed that we had been on the highway the entire time, as opposed to taking the trail!

We thanked him for the water and the advice, hopped back on our bikes and headed for the trail. It was definitely not well paved, most places it was simply gravel. A couple of places it was extremely loose gravel and impassible, one of those places was on a descent to what looked like a fairly new bridge. These places were pretty easy to pick out as their gravel was very different from the normal gravel, so it was at least manageable.

We came across a landslide which had taken out the trail, but there was a little path off to the side we were able to sneak around. 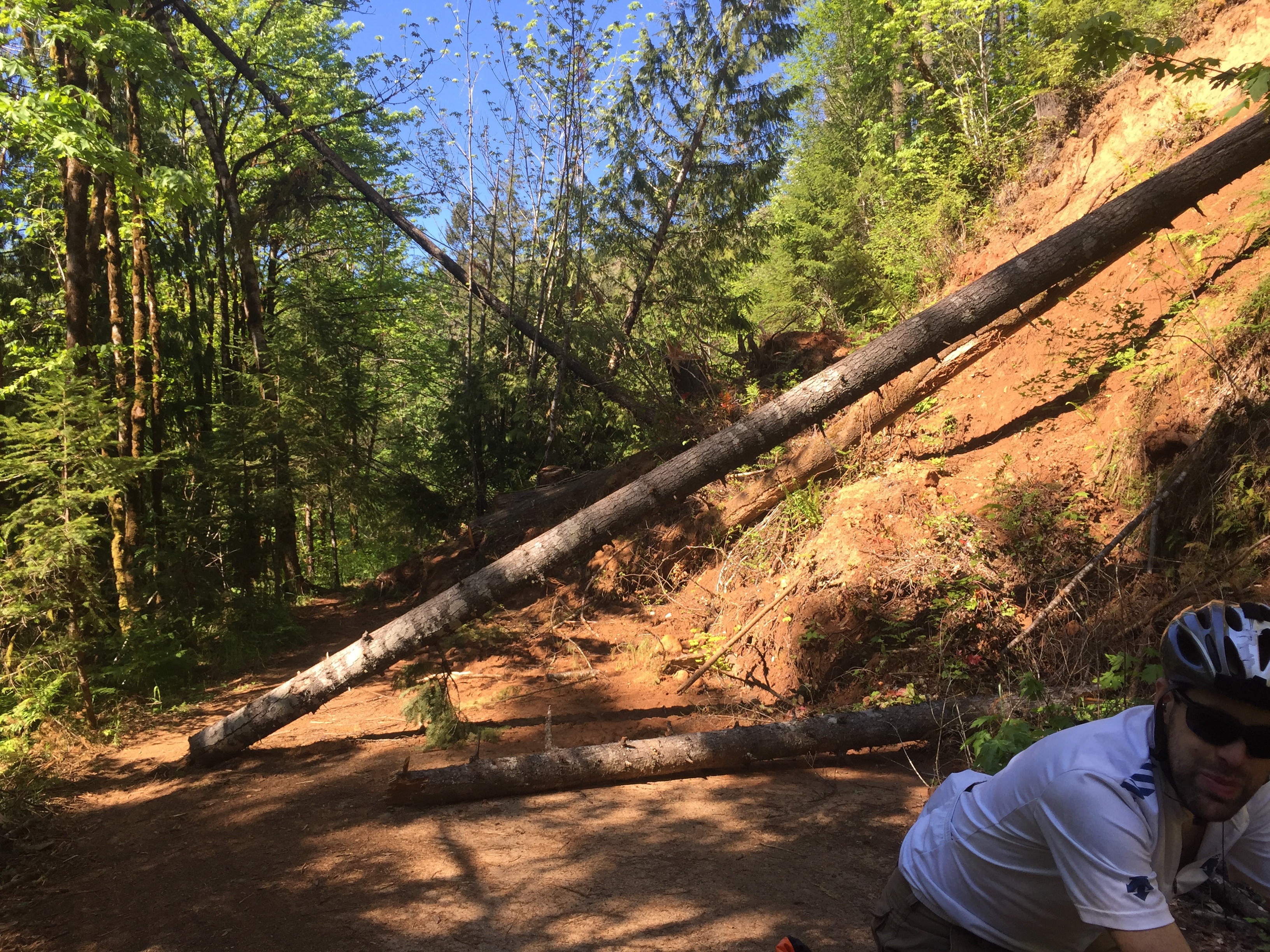 There were a few additional patches of the extremely loose gravel further down, in areas which also looked like they had been taken out by landslides. They apparently get a lot of landslides up here!

Finally, we made it into Scappoose and onto dreaded Highway 30. We were both in desperate need of ice cream, so we stopped off at a DQ for a couple of blizzards and some AC. The sign on the bank next door read 83F, and there wasn’t a lot of shade to be had.

From there we cruised down Highway 30, dodging glass, rocks, silverware, even a propane tank! Upon reaching the St. John’s Bridge, Ted and I split up, me heading across the bridge and him heading into northwest Portland.

All in all, I had a blast. I’m destroyed, and ordering delivery right now. I was a bit worried at the campground, what might happen if there wasn’t anywhere for us to stay, but was feeling pretty YOLO and figured the worst that could happen was we’d have to roll back down hill to Banks and grab a hotel room or call for a ride or something.

I also have to give mad props to Ted for choosing a pretty awesome route. Other than Highway 30, which honestly wasn’t that bad, just loud and lots of debris, the route was pretty low traffic, and extremely lovely.